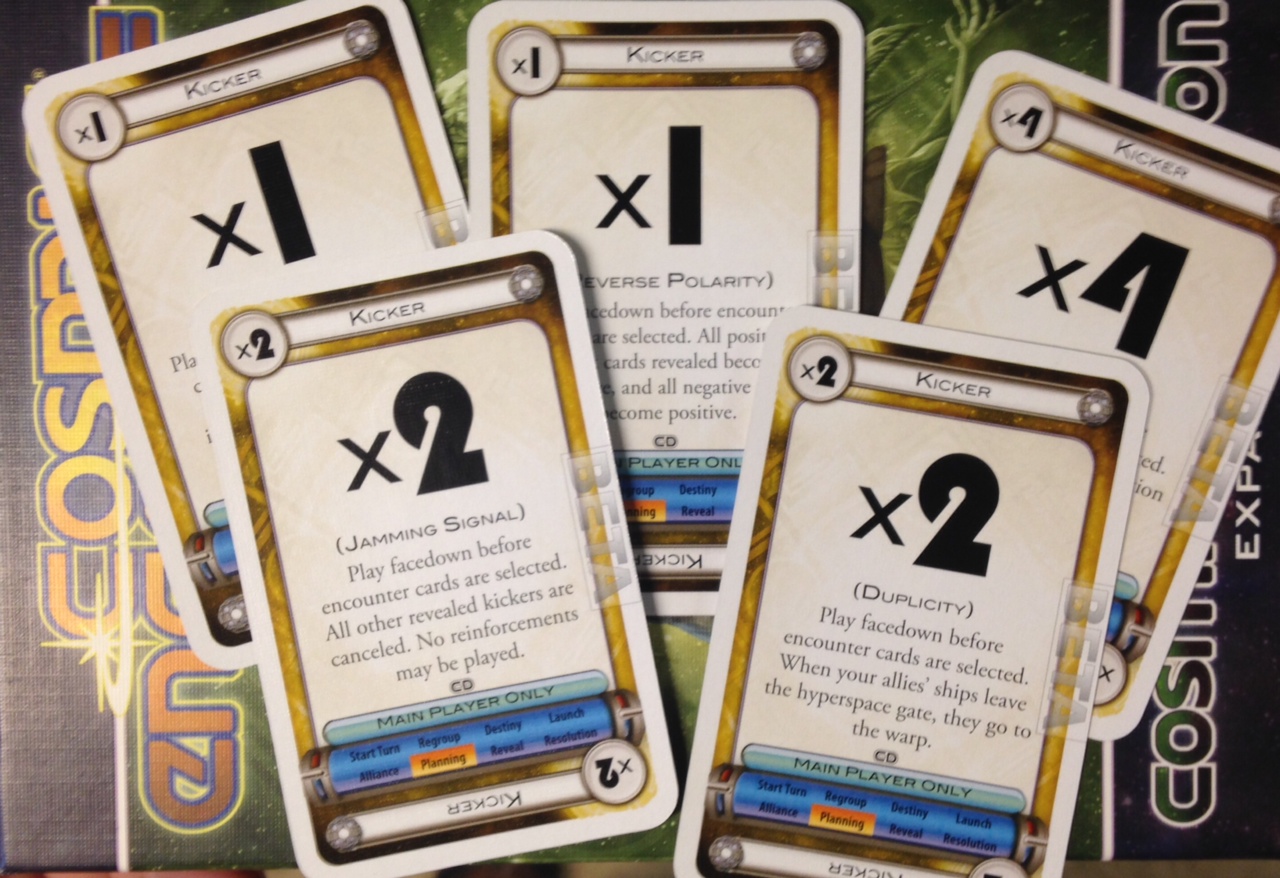 After Kicker cards, if any, have been played, the main players proceed to play encounter cards (Attack or Negotiate) as usual. When revealing Encounter Cards, turn up Kicker cards as well.

A Kicker acts as a multiplier to the encounter card. If a main player played an Attack Card, he multiplies the value on the Kicker card by the value on the Attack Card. This multiplication occurs before any similar alterations take place, such as equalizing by the Calculator or multiplication by the Virus. A negative times a positive gives you a negative result (example: -8 x 2 = -16), a negative times a negative yields a positive result (example: -8 x -2 = 16), and anything times zero gives you a total of zero (example: 12 x 0 = 0). >

If both players play Negotiate Cards and fail to make a deal, each player multiplies any Kicker he played by the number of tokens his opponent would normally lose, and his opponent instead loses that number of tokens. Note that if the Kicker is zero, the opponent loses no tokens. If the Kicker is negative, the opponent takes tokens from the Warp. Example: the main players fail to make a deal, but the offensive player also played a x2 Kicker card. Normally, both main players would lose three tokens to the Warp for failing to make a deal, but instead, the defensive player loses six tokens to the Warp (3 x 2 = 6) and the offensive player still loses three tokens. It is possible for both main players to take multiplied losses if both played Kicker cards.

In addition, the Internet Version of CE has Kickers that are additive in nature (you add the value rather than multiply). Example Kicker +3, and Kicker +-3 (which subtracts). This allows greater usage of Kickers without as much variation in the totals. There's more bluffing that goes on, and people go through their hands faster (an important factor when the deck starts to get huge).

In the FFG version of CE, Kickers appear in the Reward Deck in Cosmic Incursion and Cosmic Dominion.

x1 Reverse Polarity (All positive attack cards revealed become negative, and all negative ones become positve)
x4 Give War a Chance (Does not affect compensation or failed deals)
x2 Jamming Signal (All other kickers have no effect, and reinforcements can't be played)
x2 Duplicity (Your allies go to the warp)
x1 Self Destruct (Both sides lose)