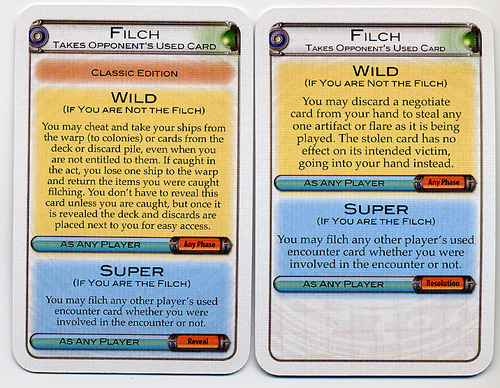 Each alien in the game has a flare card which corresponds to it. Each flare has two headings on it; Wild and Super. If a player is holding the flare for an alien other than their own, they may only use the effects under the "wild" heading. If the flare corresponds to their alien, they must use the "super". The flare for each alien in the game plus enough other random flares to equal either 10 (or double the number of players) are shuffled in the cosmic deck. Under no circumstances should you use the entire flare deck ("Cosmos forbid" as they say). Once a flare is played it is placed back into the player's hand (once its effects have resolved) Flares must be discarded when drawing a new hand.

>Players holding their own corresponding flare may play either the Wild or the Super.

This rule was instituted because we felt that Mayfair flares were too similar to edicts, and since the Eon style of retaining your flare was done away with, the flares became much weaker. Also, players were confronted with the scenario of having to Cosmic Zap their power in order to use the Wild, and the rule of whether you can Cosmic Zap a player who hasn't used their power yet (the Cosmic Zap card states "Zap a player as he or she attempts to use their power").

>Players may pay Lucre to retain a flare they have played. Amounts may vary, but we generally recommend 10 lucre.

This rule was developed to increase the value of Lucre, and to try to revive the spirit of the Eon style flares.

In the Mayfair version of the rules, flares were played once and discarded. A number of their effects were changed from the Eon version. The FFG version opted to return to the much superior mechanic of letting players retain a flare, but added rules so that a player could only play one flare per encounter, and some flares are "play once and either give the flare to the alien named on it, or discard to use".