Elemental cards are designed to increase the potential for good cards without increasing the number of cards. Each elemental is divided into five categories. Each category denotes a different card "value". These values change depending on how the holder of the Elemental is involved in a challenge. The four categories are: 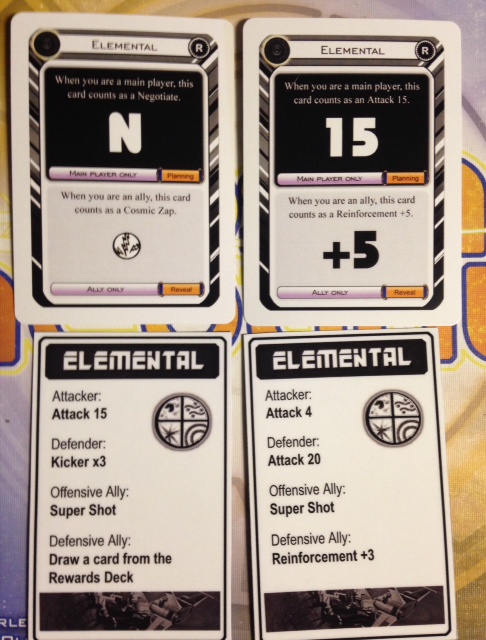 
For example, the player may have an Elemental that looks like this:

Attack 16
Reinforcement 3
Cosmic Zap Edict
Allies gain rewards as if they were a main player.


If the player with this card was the offensive main player, he or she may only use the value under the first heading. As long as they are the offensive main player that Elemental IS an Attack 16. They may not use it as a Reinforcement since they are not a defensive main player. For all intents and purposes, when a player holds an Elemental, they are considered to be holding the value that corresponds to how they are involved in the encounter, if at all (as if it were that actual card). This means that if someone plays a Finder, looking for a Cosmic Zap, that Elemental is a Cosmic Zap (so long as 1- the value matches his involvement, and 2- the value matches the named card.)

If this same player is Plagued, they may only throw away the Elemental for the edict requirement (it is still considered a Cosmic Zap), and must do so if he does not hold any other edicts. If he is Plagued, and the Elemental reads Attack 15 under "Offensive Main Player", he could throw it away as the Attack Card (since that is what it is at the moment), or a different Attack Card if he has one. If he does not use it, and becomes (for example) the defensive ally in a different encounter, he or she may now only use the value under that heading. A player with an Elemental who is not involved in an encounter is only able to use the value under Uninvolved. Elementals themselves may not be targeted as a specific card type. For example, a player may not specify that she is looking for "an Elemental" when playing a Finder nor does the Plague cause a player to discard an Elemental as one of every kind of card (though they may have to discard it if it corresponds to a value decreed by the Plague).

A player using the Keeper may not keep Elementals (unless the Elemental has a value of a card normally protected by the keeper). A value on an Elemental may be a description of a small benefit or action rather then the name of another card. See the above example.

Alternatively, you can have Elementals that have fewer values (use only one type of Ally value), or add an additional value for Uninvolved players.

A more simplified version was developed for use with the FFG version of CE.